In her role as Andrew W. Mellon Curator of Graphic Arts, Ms. Hewes builds and cares for the Society’s collections of prints, broadsides, ephemera, and photographs and works closely with the curatorial team, the Center for Historic American Visual Culture (CHAViC), fellows, and outside scholars to make connections between American history and the visual resources of the Society. Ms. Hewes has previously held positions at the Print Council of America, the National Park Service, and the Shelburne Museum, and she has published widely on American printmaking and portraiture. She has a B.S. from Ithaca College and an M.A. in Art History from Williams College. 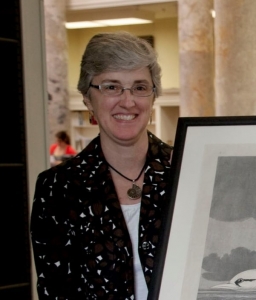