Life & Age of Man. Stages of Man’s Life from the Cradle to the Grave. – Clayton Lewis 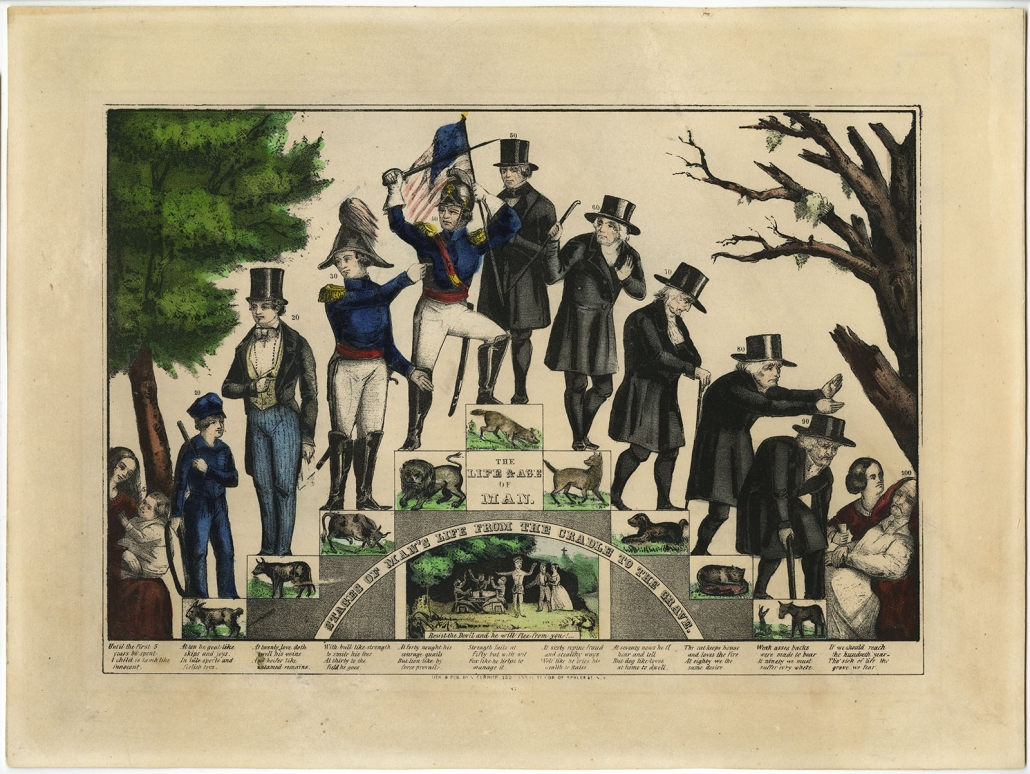 Title: The Life and Age of Man. Stages of Man’s Life From the Cradle to the Grave.

Note: Depiction of men at various life stages, from infancy to death. Includes 11 images of men ascending and then descending a set of steps with corresponding scenes of their lives, each accompanied with a verse connecting the human to an animal. The verses read:
(5) “Until the first 5 years be spent A child is lamb like innocent.”
(10) “At ten he goat like skips and joys In idle sports and foolish toys.”
(20) “At twenty Love doth swell his veins And heifer like untamed remains.”
(30) “With bull like strength to smite his foes At thirty to the field he goes.”
(40) “At forty naught his courage quails But lion like by force prevails.”
(50) “Strength fails at fifty but with wit Fox like he helps to manage it.”
(60) “At sixty repine fraud and stealthy ways Wolf like he tries his wealth to raise.”
(70) “At seventy news he it hear and tell But dog like loves at home to dwell.”
(80) “The cat keeps house and loves the fire At eighty we the same desire.”
(90) “Weak asses backs were made to bear At ninety we must suffer evry where.”
(100) “If we should reach the hundreth year Tho’ sick of like the grave we fear.”

Note: Vignette beneath the arched title reads: “Resist the Devil and he will flee from you!”

This is a lithograph print in black ink with hand coloring, typical of inexpensive American 19th-century commercial lithographs. It depicts an allegory of a man’s life in eleven ascending and descending stages, progressing from left to right, from infancy to death at age 100. Each stage has a corresponding verse that compares aspects of life at that stage to the characteristics of a particular animal. The clothing and material clues of each stage vary to indicate growth, status, career, health, and decline. The military figure carrying a United States flag at stage five steps with one foot to the apex shared with a civilian figure at stage six. The stages are framed by two trees, the one on the left green and flourishing, the tree on the right leafless and dead. Centered below an arched title banner is a square vignette of a man being pulled away by a woman from a drinking scene. This image is subtitled “Resist the devil and he will flee from you!–”

Where Samuel Broadbent’s portrait daguerreotype of the unidentified African American woman interrupts normative stratified society, Nathanael Currier’s lithograph The Life &Age of Man reinforces it. Where a daguerreotype portrait is a singular unique image for a private audience, a commercial lithograph like this example was mass-produced and distributed nationally. While race is central in the photo as a presence, it is central to the print as an absence.

Inexpensive and available, Currier’s lithographs were a constant presence in many domestic parlors, public coffee shops, taverns, hotels. They were collected, shared, discussed, and laughed at during social gatherings. The influence of Currier, and his later partnership with James Merritt Ives, was enormous in determining and codifying mainstream Protestant white American behavior and expectations. The popularity of Currier & Ives illustrations of middle-class American cultural values extended into the 19th and 20th centuries. When we think of American nostalgia, many of us envision a Currier & Ives print.

Women are barely present in this sequence — a young mother leans into the picture on the left and an elder daughter presumably comforts the dying centenarian on the right. Our time traveler is dapper and smartly dressed as a young man, in military uniform twice as an enlistee and as a high ranking officer, proudly waving a sword and United States flag. At the pinnacle of “50” he becomes a civilian, conservatively dressed, and from that point on he descends, increasingly stoop shouldered and gray.

In addition to this mildly amusing sequence there is a warning, centered at the bottom: Resist the Devil and he will flee from you! This is coupled with a vignette of a woman pulling a man from the lure of intemperance.

What does this lithograph say  about life’s expectations? Certainly there is a presumption of binary gender identity, and that the path for men is  completely different than that for women. The women’s path is in fact a different lithograph. On the path for men, women are present and necessary at the beginning, but otherwise unseen until the end. Patriotism and valor are expected, and past fifty, one is no longer an active participant in society. Financial means are presumed, apparently earned when young (age twenty holding some papers), or in military service before middle-age. Temperance and piousness will lead to security, although the drinkers do appear to be having all the fun. Barely present are travels and adventure outside of the military, creative production, and meaningful social interactions. Religion is featured, not as a path to enlightenment but as an avoidance of everlasting hell.

This print corresponds to and reinforces established “normal” society as white, Christian, Protestant, patriotic, sober, conforming, and predestined. Hanging in a simple frame in the parlors of thousands of American middle-class homes, this lithograph establishes normative behavior to be followed, or to be rebelled against.