North Side of Chestnut St., Extending from Sixth to Seventh St., 1851. – Clayton Lewis 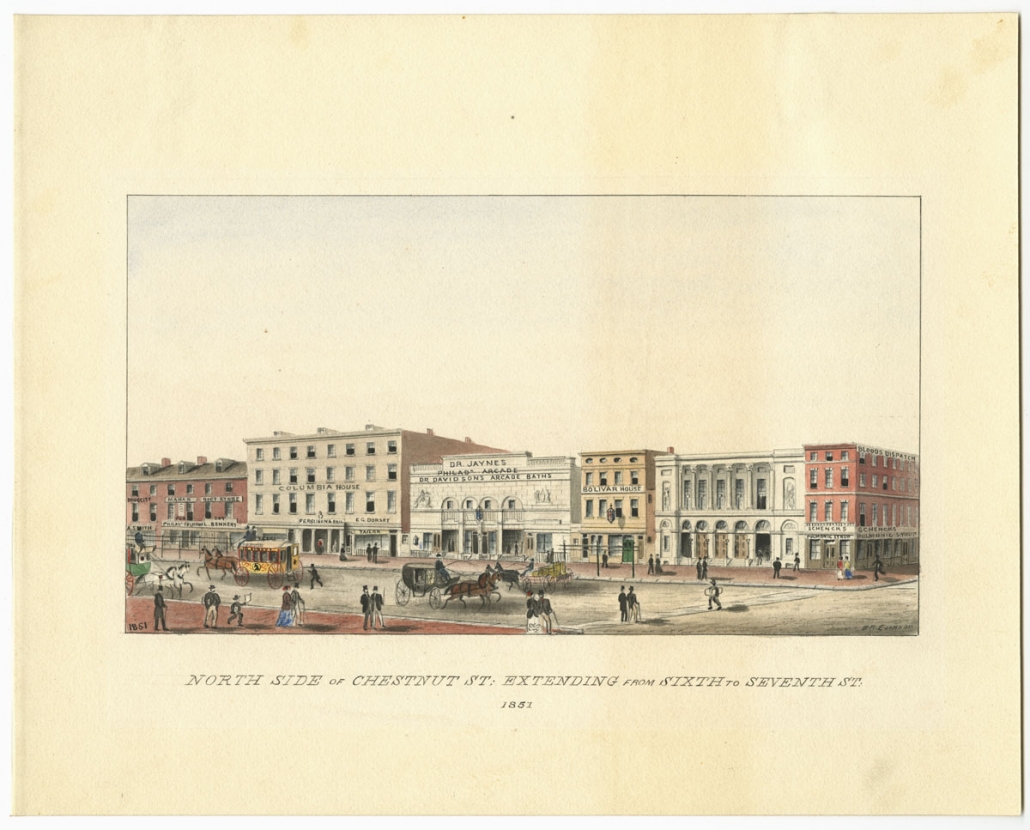 Title: North side of Chestnut Street Extending from Sixth Street to Seventh St. 1851.

This item is a horizontal format panorama watercolor depicting the architecture, storefronts, signs, and people along a 19th-century commercial city block in Philadelphia, Pennsylvania, as it appeared in 1851. The vantage point is slightly above eye-level, from the corner of Seventh Street on the south side of Chestnut Street, looking across to the north side. Pedestrians comprised of colorfully dressed men and women populate the brick sidewalks while horse-drawn vehicles, apparently a private coach, public stage, omnibus, and commercial delivery wagon occupy the street under a cloudless sky. It is signed “B. Evans” in the lower right corner and dated lower left “1851.” The painted image sits within a ruled border, the title is hand printed across the bottom margin in capital letters.

The watercolor illustration “North Side of Chestnut Street Extending from Sixth Street to Seventh St.” by Benjamin Ridgway Evans documents a street in the city of Philadelphia as it once was. This image also records what wasn’t.

This streetscape gives us a panorama that simulates a stroll down the sidewalk of a thriving commercial district while gazing at the opposite storefronts. It represents a nostalgic look at Philadelphia’s urban scene of the 1850s. The emphasis is on the businesses that occupied the storefronts, many of which have been identified with rendered signs. The pedestrian and vehicle traffic are to some degree engaged with the commerce represented. The atmosphere is one of mercantile activity, prosperity, and opportunity. The streetscape is neat and orderly, tidy and clean.

This watercolor is one of a group of 151 commissioned in the late 19th century by Philadelphia jeweler Ferdinand Julius Dreer to document the passing of old Philadelphia as it was being erased by a building boom.

Evans brought a professional architect’s skill in perspective drawing and projections of constructions not yet in existence. And like many architects, the human figures are indicators of scale, anticipated activity, an idealized and positive presence however generic. In this case, the architect is projecting back in time to show a streetscape as it had previously existed.

With any work of visual art, we expect that some aspects of a given scene will be emphasized and others left out. The intent of Evans’s views seem to have been to represent the everyday history as experienced by many Philadelphians, in a commercial setting. This image does not chronicle the most famous historic sites of Philadelphia such as Independence Hall, just down Chestnut Street, however, John Haviland’s innovative Philadelphia Arcade, basically a 19th–century shopping mall of ninety retail stores, is clearly marked.

The rapid growth and redevelopment of the city demolished and removed much of Philadelphia’s earlier architecture of the sort that appears here. It is also a document of erasure in another sense. In spite of the detail and accuracy for the storefronts and businesses, and the emphasis on everyday life rather than major historic sites, Evans has omitted much of the human street life of the city and street activity that we know to have been present from other sources.

The first of the great visual chroniclers of urban Philadelphia, William Birch, published engraved views of what was at the time, the most important city in the United States at the start of the 19th century. Birch’s views are notable for the matter of fact inclusion of a population that cut across several classes of society, including street vendors, enslaved African Americans, and visiting Native American delegations. Birch’s Philadelphia shows a street parade of urban sights, sounds and smells. Although Evans’s view of Chestnut Street is also full of people, coaches, and omnibuses, the human presence appears filtered to the class of commerce and means. Is this an accurate representation of the street in the 1850s? Without further research into Philadelphia street society, I am speculating, but compared to Birch’s Philadelphia, Evans’s seems sanitized of the grit and sweat that paralleled and supported the commerce and trade.

What Evans does give us delineates an indistinct society (and architecture) that is clean, orderly, Anglo-European-American, and uniformly dressed. Opportunity, virtue, righteous honesty, conformity, and social stability are emphasized. The comfortably occupied street comes with orderly behavior, minimal interactions. In the Evans’ view, the only breaks from serenity are a newsboy who tails a well-dressed couple, hawking a paper; a man in stride appearing to be hurrying for reasons unknown; and another striding figure chases an omnibus.

Evans’s style of representation owes much to the enormously popular illustrated county atlases and local histories that celebrated middle-America in the 19th century. Like these, he presents an idealized urban America, designed to flatter established White society, an America that never really was.

So what does a historian do with source material like Evans’ views that represents the past but with obvious omissions? I suggest starting with the recognition that all historical sources, including visual materials, represent an opinion. From there, consider the appropriateness of the question being asked of the work. If one is seeking the exact and complete appearance of Chestnut Street, one may do better with photographs or written accounts. However, if one is looking to document how nostalgia can reshape historical memory, then Evans’s watercolor views are right on target.